Chöd is a spiritual practice found in the Tibetan Buddhism (where it is classed as Anuttarayoga Tantra). Also known as “cutting through the ego,” the practices are based on the Prajñāpāramitā or “Perfection of Wisdom” sutras, which expound the “emptiness” concept of Buddhist philosophy. Chöd combines Prajñāpāramitā philosophy with specific meditation methods and tantric ritual. The Chöd practitioner seeks to tap the power of fear through activities such as rituals set in graveyards, and visualization of offering their bodies in a tantric feast in order to put their understanding of emptiness to the ultimate test. The main goal of Chöd is to cut through ego-clinging.

Ritual Objects
Practitioners of the Chöd ritual, chödpas, use a kangling, a human thighbone trumpet, and a chöd drum, a hand drum similar to but larger than the ḍamaru commonly used in Tibetan rituals. Lama Rabten and Acharya will perform the ritual with these instruments. 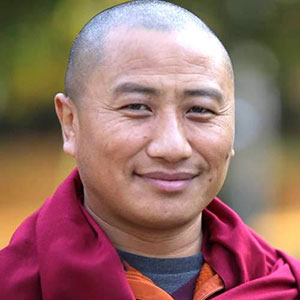 Lama Rabten Tshering is the resident teacher and spiritual director of Nalandabodhi Canada. His dharma education started at a young age under guidance of his father who taught him music and Karma Kagyu tantras. Lama Rabten spent his early years at Rumtek Monastery, the principal seat of Gyalwang Karmapa in Sikkim, India, where he expanded his study and practice in the Tsurphu tradition—training in Vajrayana rituals, such as music, torma, tantra memorization, and dance.

In 1992, Lama Rabten was appointed disciplinary master of Rumtek Monastery by Tai Situ Rinpoche and Goshir Gyaltsap Rinpoche, and carried out this responsibility for five years. In 1997, he entered a three-year retreat at Pullahari Retreat Centre in Nepal. While there he completed more training in meditation and tantra under the guidance of Drupon Khenpo Lodro Namgyal, Bokar Rinpoche, Tenga Rinpoche, and Khenpo Tsultrim Gyamtso Rinpoche. 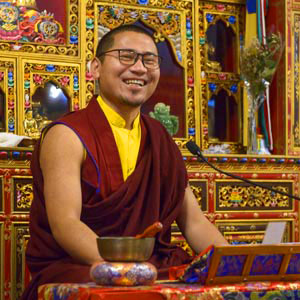 Acharya Choying Gyurmey, resident lama at Ripge Dorje Centre since 2018, was ordained as a monk by Khenpo Tsultrim Gyamtso Rinpoche in 1992 when he was 10 years old. He was then admitted to Lava Kagyu Thekchen Ling Monastery in India. After completing basic monastic training and education in Tibetan language, scriptures, rituals and Buddhist history, he joined the 13-year Acharya Program in Higher Buddhist Philosophy at the Rigpe Dorje Monastic Institute at Lava Kagyu Tekchen Ling Monastery. He successfully completed the program in 2014 and was conferred the Masters (Acharya) Degree in Higher Buddhist Philosophy on April 15, 2015, by His Eminence the Fourth Jamgon Kongtrul Rinpoche.

Suggested donation: $15 / members $10.
Please give what you can.
https://rigpedorjemontreal.org/en/dons/