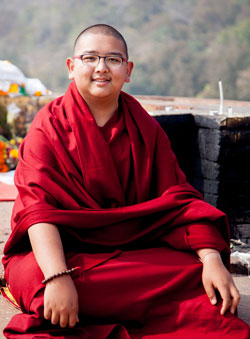 His Eminence Jamgon Kongtrul Lodro Chokyi Nyima is the fourth in the garland of incarnations of the enlightened mind of Jamgon Kongtrul Lodro Thaye. Born in Central Tibet in the wood pig year on November 26th, 1995, he was found in perfect accordance with the prophecy and instructions of the Supreme Head of the Kagyu Lineage, His Holiness the 17th Gyalwa Karmapa. His Eminence resides at Kagyu Tekchen Ling, his monastic seat in Lava, West Bengal, India, and studies in the Rigpe Dorje Institute there. Annually, he joins the Gyalwa Karmapa and the vast Kagyu sangha at the Great Kagyu Monlam in Bodhgaya, India

The prophecy, the search, and the recognition of His Eminence are described in the book EMA HO! published by the Jamgon Kongtrul Labrang and available at Rigpe Dorje Centre. It can also be viewed on  www.jamgonkongtrul.org

The Previous Incarnations of JAMGON KONGTRUL

H. E. Jamgon Kongtrul Rinpoche, Lodro Chokyi Nyima, is the fourth incarnation of Lodro Thaye, the First Jamgon Kongtrul Rinpoche, who was born in Eastern Tibet in 1813. His previous incarnations, from the time of Lord Buddha Shakyamuni, included great teachers who were significant in establishing and preserving the Buddha’s teachings. Among them were Ananda, a principle disciple of Lord Buddha and a holder of his teachings; Lotsawa Vairocana, one of the twenty-five major disciples of Guru Rinpoche and among the first Tibetan translators of Buddhist sutras and tantras; Khyungpo Naljor and Dolpopa Sherab Gyaltsen, founders of the Shangpa Kagyu and Jonang Lineages respectively.

In the Samadhirajasutra by Lord Buddha, Jamgon Kongtrul the Great, Lodro Thaye, was prophesied as an emanation of Buddha Vairocana and the future Buddha Namparnangdze, the last of the IOOO Buddhas in this present Good Kalpa. The Buddha also foretold that he would be the one who would compile the FIVE GREAT TREASURIES bringing together all the teachings, instructions, and practices of the different Buddhist traditions that make possible the realization of awakening. This rare and precious compendium remains a central reference for transmissions, empowerments, and commentaries. 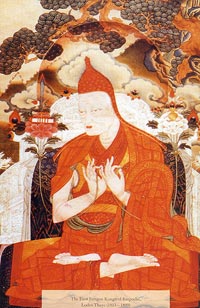 1. THE 1st JAMGON KONGTRUL RINPOCHE, LODRO THAYE (1813 – 1899) is reknowned even today as a prodigious scholar and deeply realised master. Born in the year of the water horse, Lodro Thaye received teachings and empowerments from teachers of diverse sects and lineages but, as a practitioner, he was a strict adherent to the Karma Kagyu tradition, and his Root Teacher was the 9th Tai Situ Rinpoche, Pema Nyinje. In the wake of the cultural and religious renaissance in 19th century Tibet, Lodro Thaye founded the RIME movement together with Jamyang Khyentse Wangpo of the Sakya Lineage, and Terton Chogyur Lingpa of the Nyingma Lineage. Its aim was to transcend sectarianism among followers of the Lineages. Lodro Thaye was a main holder of the Karma Kagyu Lineage and he became the Root teacher of the 15th Karmapa, Khakhyab Dorje.

In the last visit by Karmapa Khakhyab Dorje to Tsandra Rinchen Drak, at Palpung, Karmapa and Lodro Thaye had the feeling that they would not be meeting again in that lifetime. Before the 15th Karmapa departed, he made many offerings of long life to Lodro Thaye and many wishes that they would meet again. In case that would not be possible, the 15th Karmapa requested Lodro Thaye that his reincarnation takes rebirth in his family. Lodro Thaye accepted this request. Soon after, on January 19, 1899, at the age of eighty-seven, he passed away. 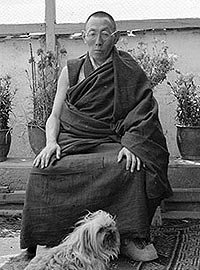 2. THE 2nd JAMGON KONGTRUL RINPOCHE, PALDEN KHYENTSE OSER (1904 – 1953) was born in the wood dragon year in Central Tibet at Tsurphu Monastery, as predicted by the 15th Karmapa, Kakhyab Dorje. He was the Karmapa’s son and heart disciple, and he spent most of his life at Tsandra Rinchen Drak at Palpung, East Tibet guiding the activities there and supplying it with everything needed.

Palden Khyentse Oser was a greatly realised scholar and master held in high esteem by many as a spiritual guide. He studied, mastered, practiced, taught and transmitted many times over, the sutras, tantras, and the Five Treasuries to monks, nuns and numerous disciples, and inspired them to practice and train in the path of liberation. He attained realisation of the ultimate lineage and became the lineage holder and one of the Root Teachers of the 16th Karmapa.

In 1953, as he was leaving his seal at Tsandra Rinchen Drak for Thrangu Monastery to perform the parinirvana ceremonies for Traleg Rinpoche, he indicated, in a light-hearted way, to one of his general secretaries, the late Changdzo Buddha, that he would not be returning after the ceremonies. On the way, he visited the 9th Sangye Nyenpa Rinpoche at Benchen Monastery. There, he told Sangye Nyenpa Rinpoche that he may die and would be very happy if he would visit him if that should happen.

One day, when he was very ill, Palden Khyentse Oser told his chanting master and close disciple, Umze Kanjam, that he would soon die and take rebirth in Central Tibet, and they would meet again. Umze Kanjam asked Rinpoche where he would be reborn in Central Tibet. In reply, the Second Jamgon Kongtrul Rinpoche told him that they should ask The 16th Karmapa, Ranjung Rigpe Dorje. 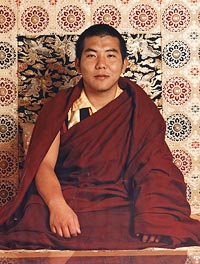 3. THE 3rd JAMGON K0NGTRUL RINPOCHE, LODRO CHOKYI SENGE (1954 – 1992), was born in Central Tibet as foretold by his previous incarnation. The circumstances of his birth were prophesied by the 16th Gyalwa Karmapa, Ranjung Rigpe Dorje. Born in the wood horse year, The 3rd Jamgon Kongtrul Rinpoche would become an exemplary practitioner, master, guide and humanilarian, and his activilies for the Buddhadharma and sentient beings would span the East and West. His devotion to his Root Teacher the 16th Karmapa was perfect and exemplary of Guru-Disciple relationship. He was considerate and gentle in manner and in the words of The Very Venerable Bokar Rinpoche, “with clear vision of the world and of Dharma, he soothed the mental sufferings of others, cut though the net of their doubts, and guided them to the right path through direct and indirect means.”

Sensitive to the needs of others, particularly the plight of the destitute, he used his connections with others who shared similar ideals for humanity, and founded a network of organisations: Paramita Charitable Trust in India; Ananda Sangh Society in Nepal; and the Rigpe Dorje Foundations in Canada, the USA, France, Switzerland, Germany, and Hongkong to facilitate help for the needy in India and Nepal where poverty was, and remains, extreme. Just before he passed into parinirvana, he initiated a home for the destitute, a health care centre for a remote community, and a school for poor children. In addition, he also initiated programs for the treatment of cataracts in remote areas.

Rinpoche shared his ideals and stories of the plight of others with his monks, and created in them an awareness of the world beyond their community. The various projects he developed during his lifetime grew and strengthened to benefit the destitute after he passed away.

The 3rd Jamgon Kongtrul Rinpoche dissolved his mind in parinirvana on the 26th of April 1992. A month before that, he consecrated the new Pullahari Monastery and told Tenzin Dorjee (General Secretary) that there would be a very good future for Buddhadharma activities in Pullahari and advised him to pay attention to the place. Then at Rumtek Monastery, just a few days before he passed away, he called together Tenzin Dorjee and a few other close personal monks and lay attendants, to explain his vision for the Jamgon Kongtrul Labrang (administration), advising them how to continue and work with each other.

Though the Third Jamgon Kongtrul Rinpoche’s life was short, his deeds were vast and many. He left a wealthy legacy from his life as a Buddhist monk, a disciple, a teacher, a spiritual master and guide, and a human being.